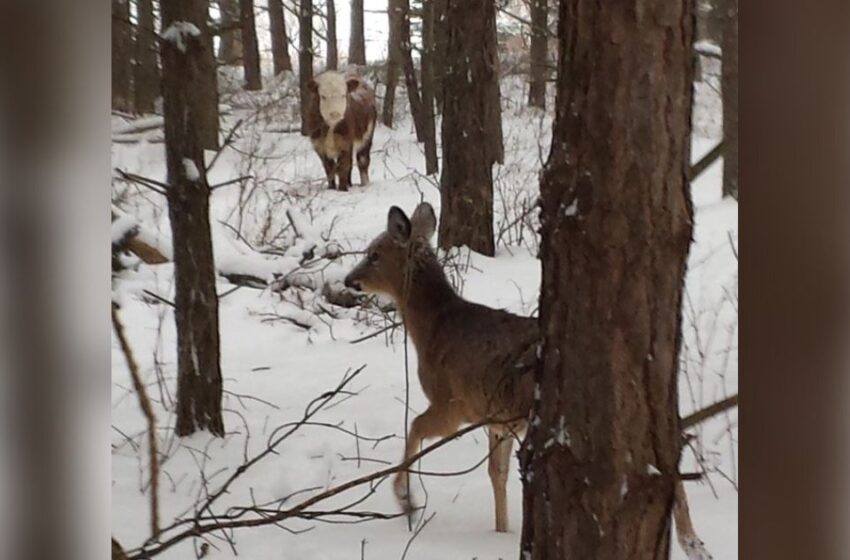 Bonnie was a cute calf who ran away hours before being slaughtered. Bonnie had been living on a farm where all the cows were raised to be slaughtered. When the farm’s owner died his relatives decided to sell the farm animals to another farmer. And during the loading of the cows, Bonnie captured the right moment and escaped.

She ran into the woods and no one could find her trail even after how hard they searched for her.

It was Becky Bartels with whom the rescuers could find the cow in the freezing winter. It was winter and ecky knew that a deer herd was roaming in that area. As she wanted to know more about the deer herd she put some hidden cameras there. And all of a sudden the woman noticed a calf among the deer. It was Bonnie. The herd welcomed the little calf and they lived happily and peacefully.

Becky became feeding the cow as she knew that Bonnie couldn’t survive under the wild conditions with deer for very long. Day after day Becky came closer and closer to Bonnie but the caf was still frightened. However, the days were getting colder and Becky decided to contact the Farm Sanctuary, a local animal sanctuary based in Watkins Glen, New York.

The director of the Farm Sanctuary, Susie Coston, rushed with her rescuers to catch the cow and bring her to a safer place. Though it was hard to catch Bonnie because of her fears the team decided to give sedatives to the cow. After a few failures, they gave her the right dosage of sedatives and could bring Bonnie to the sanctuary.

Now Bonnie lives with other cows in the sanctuary and has no fears.